We at Cibola Farms have contemplated this topic for more than 20 years now, and we have tested out everything from a grain/hay finishing lot in the early years to a pure grass finished production effort in the middle years to arrive at our current line of thinking as practiced presently – grain on grass.

Nutshell description:  Cibola Farms operates a grass-based rotational grazing system where grain is used on a supplemental basis through the year as dictated by nutritional requirements (lactating cows during calving season, conception periods in the fall, severe seasonal variations, etc.).  Grain is used to finish our bison in the last 9-12 months, but this is done while those bison are rotating on the best lush green grass that is available and only during the grass growing season.  We do not finish our bison on grain and hay.

Definitions:  Grass-Fed and Grass-Finished mean two different things.  Grass-Fed means that the referenced animal is eating some sort of forage based diet.  All ruminants / ungulates are fed forages (dried or fresh) as it would be impossible to keep them alive for long without a diet that is composed of at least 60-70% forages.  Grass-Fed should describe that the animals are standing on green grass pastures during their production years.  Grass-finished is a much harder thing to define, but as far as we are concerned, this is generally a very intensive operation where the farmer has the resources to cultivate a high-energy forage crop for the purpose of providing increased energy and protein for a period of time to affect a change in the muscle structure that leads toward a more tender final product, and involves the animals harvesting this higher energy forage directly (i.e. not dried and fed in a lot).  Usually these grass-finished operations still require crop cultivation and use some sort of crop product in order to reach these high levels of protein and energy required to create a tender product.  These might involve beats, cabbage, sorghum, Sudan grass, Rapeseed, corn and other fast growing grasses that are not allowed to get to seed stage before they are grazed.  True grass only meats come from Argentina and places in the US that produce meats that are very flavorful, but not always very tender. 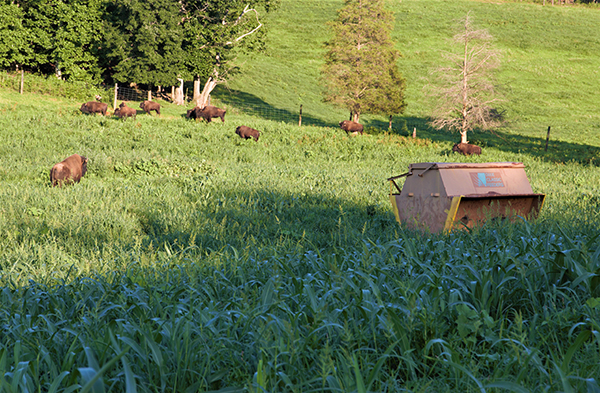 Through the years, and thanks to Daisy, the home kitchen raw milk dairy cow, we have come to the realization that the culprit in the grain versus grass discussion is not the addition of some grain as much as it is the lack of green grass.  All reputable source studies on the subject of grain versus grass are looking at the two extremes and comparing animals in a feedlot to animals on grass pastures.  Animals in feedlots are fed about 1/3 of their daily diet in grain and the other 2/3 of their daily diet in hay and silage, which are both dead grasses that have been harvested, dried or fermented and delivered to the animal in the feedlot.  These dry grasses no longer carry the beneficial properties found in green grass-finished meats.  Animals that are finished on green forages out on pasture have clear high levels of CLA, Omega-3 Fatty Acids, Vitamin E and other beneficial properties that are severely lacking in the feed-lot meats.

On one side of this discussion, you get tender well marbled meats from feedlot animals, and on the other side, you get a variety of healthy benefits from grass-finished animals.  Getting tender well marbled meats from a grass-finished operation is very complicated and far more resource intensive than it might initially appear.  Leaving animals on pasture grass until the day that they are ready for processing (usually dictated by a combination of age and weight), does not produce a tender product.  Americans have grown accustomed to eating tender meats, and this is what the majority of our customer base demands.

A large part of this debate seems to be focused on a bit of extremism.  We get a lot of prospective customers that are looking for a grass only meat product, and yet those people often want it to be as tender and flavorful as a corn fed piece of Midwestern steak.  We find that aiming for the balanced approach usually provides the best results.

Due to a variety of reasons that include land costs and production costs, creating a grass-finishing operation at Cibola Farms has turned out to be far more expensive and complicated than we would have expected.  The demand for grass-finished bison meat is extremely low at the retail price levels that would be necessary to sustain such a business model.  This is where Daisy comes in.  Based on our observations and experience producing grass-based milk using a grain supplement while the dairy cow is on green-grass pastures, we have decided to aim for a grain-on-grass finished bison product.  We work the stocker bison in the spring and we break them into three groups.  The first group goes back to the 200 acres of grass across the road to graze for another year with no grain inputs. The second group are the largest animals and they go immediately into the first grain-on-grass finishing program and will graze green grass from May through July with the addition of a fully loaded self-feeder of corn and soybean meal grain pellets (specially formulated for Cibola Farms to eliminate antibiotics, bone meal and other impurities).  There is no limit to the amount of grain to which they have access, but at the end of the three months, the grain consumed always represents about 33% of their body weight.  The final group of stocker bison are grazed on grass for three months without grain, then put into our final grain-on-grass finishing program for the season that runs from August through October.  We only process in these two windows of July / August and November / December so that the meats are laden with the rich grass goodness that comes from our pastures.

The first step was to create and implement the system.  The second step was to test the product for flavor, tenderness and quality.  The first two steps were completed with much success, and we are very happy with the product.  The final step was to work on proving our theory, which we have done with the help of Virginia Tech and the results are really quite promising.

Daisy is milked every day at Cibola Farms, and aside from the desire for access to raw milk, we were also looking for a grass based milk product for personal consumption.  All domestic dairy cows require grain to maintain their milk production due to the genetic modifications that humans have made over hundreds of years to produce a cow that puts all production into milk and none into meat.  Without the grain, they will continue to produce vast quantities of milk each day and pull the resources that daily grain provides from their body when grain is unavailable.  Eventually they will start to dry up, but often times after doing damage to their future body condition which results in a variety of problems.  Again, this is how they were bred and is unavoidable.  We of course, not being dairy farmers, did not realize that we had to load our dairy cow up with 1/3 of her daily feed consumption in grain each day and were very disappointed when this realization set in. What about our desire and goal of grass-based milk?  Well, we followed the prescribed daily grain ration and discovered after just 3 days at our farm that her milk started to turn a deep yellow color.  She had come from another farm where green grass pastures were not available.  This yellow color continued to deepen until we had the richest pasture based milk that we have ever seen.  It has been many years now without any change, despite the fact that she is getting 1/3 of her diet in grain.  Two years ago she calved very late in the grass-growing season, so we were forced to milk her through the winter (yuck).  As the green pasture grasses disappeared and winter set in, we started to feed her hay plus grain.  Her milk turned white.  All the green grass benefits were clearly gone.  Once the spring grasses returned, her milk color deepened back to its lustrous deep yellow and the flavor returned.  So…we got to thinking.  Maybe the options aren’t only feed-lot or grass-finished.  Maybe there is a happy balanced middle-ground:  Grain-on-Grass.

We don’t believe that ruminant animals were ever naturally grain-free.  Bison prefer grain over grass when it is initially put in front of them, and that is likely a purely natural instinct.  In the wild, bison would graze across the Great Plains in a wide migratory pattern.  The growing season for native grasses (now mostly gone) on the plains is relatively short, just a few months.  The plants grew very quickly and very tall and ended their season with a large seed head, much larger than we have in the grasses that currently grow in this area, and much larger than the invasive species of grasses currently growing on the Great Plains that have since pushed out nearly all native grasses.  The Bison would then move in a constantly flowing pattern across the plains consuming everything in their path, including the vast quantities of seeds.  Plains grasses product on average 500 lbs. of grass seed (grain) per acre, which is one reason why they are so good at growing grain crops.  With 23 million acres of original Great Plains, that is 11.5 billion pounds of grass seed per year that bison had access to.

The bison at Cibola Farms gave us this demonstration a few years ago when we had our poultry operation using part of a bison pasture, so that we could not graze the majority of the pasture until well into the summer after the spring grasses fully went to seed.  We turned the bison into the pasture and they spent the first full day nibbling off the seed heads from the grasses before they began to graze.  The pasture was thick with seed stems before they entered, and the next day every seed head was gone.  Left was the bushy grass and the long headless seed stem.  After further contemplation and observation, we realized that all wild animals “fatten” toward the end of the season when there is a wide abundance of seeds, fruits, nuts, acorns, etc.  Our bison love our walnut trees and hang out there for hours working on cracking open the hard shell in the Fall.  Green pastures in a rotational grazing system do not provide any of the natural occurring seeds found in the wild.  All of our pastures have been groomed for maximum grass production, and the bison are continually moved across in a very calculated pattern in order to keep the grass in a constant vegetative state (just like mowing a lawn).  This is a necessary part of the production operation, for which 400-500% more land would be required to replace this system.  Using grain to replace the loss of “natural fattening” that occurs in wild animals in nature is our general goal, but the key factor for us is to keep them on green grass pastures during this process.

Open Daily: 9am – 5pm
Retail market at the farm

Have questions? You can email us at farm@cibolafarms.com.